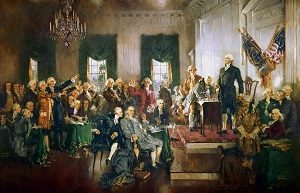 Well, you all know what the atmosphere is in the United States right now with Trump’s team arrival to the steering wheel. The controversial views and statements of the new president confuse a great deal of people because of their nature and possible consequences. Many fear that with Donald Trump being in chief, some of Obama’s achievements are in danger (especially the ObamaCare Act which is so important for students as well). But, fortunately, the US people have the constitutional law and the Supreme Court that control the processes of governmental changes and law making. They turn constitutional changes into quite a challenge for the new governor.

But, as in many other great states, these law bodies are not perfect either. If you’ve decided to write an analytical essay on constitutional law, you have to first come up with a topic that is:

And it’s not that easy because everything that is connected with this governmental body is complex and uncertain.

But you are not alone in this – we’ve prepared 16 thought-provoking topics for a great analytical paper so that you could find your bearing in a huge pool of information.

These issues are very burning right now because the new regime is trying to impact the most sensitive issues in the American society and people are not happy about it. These new bills, laws and bans are all connected with the constitutional law and human rights, and while some of them are protected by the government, a great deal of them are constrained in the open.

Writing an analytical essay about the constitutional law is interesting, challenging and timely. Go through our suggested topics, choose the one that you feel most steamed-up about and create a great paper that will impress your supervisor.