While Writing a Best Man Speech… 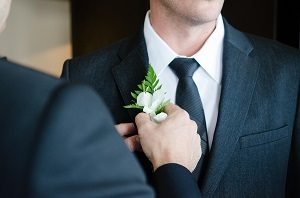 Sooner or later, almost every male is asked to be one’s best man. Either on a wedding of a brother or on the marriage of a close friend the role of best man is considered equally honorable and requires much effort. One of the most important duties and the greatest challenges simultaneously is a preparation of the best man speech. Writing a best man speech is quite a difficult task as the speech should be soulful and playful, cause tears and smiles, and include all the most interesting moments from the life of newlyweds. During the process of writing a best man speech, an individual should remember about the necessity to express gratitude, mention his personal connection to fiancé, and make the guests laugh.

Undoubtedly, the first and the main step in writing a best man speech is a preparation that should be made long before the wedding. Sketches of ideas received due to the brainstorming would be the best way to remember all the most interesting stories and funniest moments with a groom. The speech should not be performed in a formal way or a way that does not reflect a personality of the best man. Furthermore, it must have an appropriate length, mostly from 2 to 5 minutes in order not to be too boring for the public. It is equally important to remember the main goal of this special speech – the couple should be celebrated and presented before the guests in the most beautiful light. Last but not least the best man speech has to be improved and thoroughly practiced as soon as it is written.

The key issue to remember before the delivering a best man speech is an importance of maintaining one’s personality and letting the speech flow in a natural way. Another necessary moment while giving a speech is a state of being sober. Of course, there is a possibility to drink some alcohol in order to take the edge off; however, the best man could not appear in public a sloppy who barely mumbles the words. One more rule of giving the best man speech of a high quality states that before starting a speech one should ask the audience for their attention and only then say a few introductory words. The next step presumes to express the gratitude to all the guests, bride and groom’s parents, and bridesmaids as well. On the subsequent stage, the best man can include a light joke at fiancé expense in order to make the atmosphere more informal and relaxed. After that, it is important to keep up the emotional balance of the public and tell a funny and/or touching story about the groom and the bride.

However, all the sensitive subjects or unpleasant details should be carefully omitted. The good decision would be to give a compliment about couple’s relations and end the speech with an inspiring quote about the marriage of ever-lasting love. All in all, the best man should encourage the guests to raise the glasses and propose a short but bright toast.